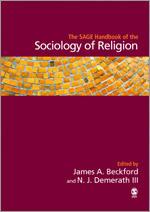 The SAGE Handbook of the Sociology of Religion

"Serious social scientists who care about making sense of the world can no longer ignore the fact that religious beliefs and practices are an important part of this world. Nor can scholars claim to understand religion by adding a couple of variables to their models, anymore than they could understand race, gender, or social class this way. This Handbook is a valuable resource for specialists and amateurs alike. The editors have done an exceptionally fine job of incorporating topics that illuminate the range and diversity of religion and its continuing significance throughout the world."—Robert Wuthnow, Princeton UniversityAt a time when religions are increasingly affecting, and affected by, life beyond the narrowly sacred sphere, religion everywhere seems to be caught up in change and conflict. In the midst of this contention and confusion, the sociology of religion provides a rich source of understanding and explanation. This Handbook presents an unprecedentedly comprehensive assessment of the field, both where it has been and where it is headed. Like its many distinguished contributors, its topics and their coverage are truly global in their reach. The Praise for this text:"In their introduction to this Handbook, the editors affirm: 'Many sociologists have come to realise that it makes no sense now to omit religion from the repertoire of social scientific explanations of social life'. I wholeheartedly agree. I also suggest that this wide-ranging set of essays should become a starting-point for such enquiries. Each chapter is clear, comprehensive and well-structured - making the Handbook a real asset for all those engaged in the field."—Grace Davie, Professor of Sociology, University of Exeter, UK"In the last two decades the sociology of religion has experienced an intellectual renaissance. The old paradigm of secularization has been replaced with new theories and methods recognising the importance of religion in modern society. The new topics include women and spirituality, violence and power, globalization and glocalization, fundamentalism, identity and life course, spiritual markets and rational choice theory. The Handbook for the Sociology of Religion not only reflects but develops and extends this renaissance. Not so much a handbook but an intellectual feast."—Bryan Turner, National University of Singapore