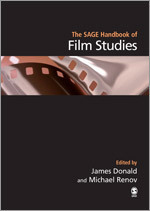 The SAGE Handbook of Film Studies

Written by a team of veteran scholars and emerging talents, The SAGE Handbook of Film Studies maps the international traditions of the field, drawing out regional differences in the way that intellectual reflection on cinema and film has been transformed into a field of systematic inquiry. It reflects on the field's conceptual infrastructure, the dominant paradigms and debates, and evaluates their continuing salience. Finally, it looks optimistically to the future of film, the institution of cinema, and the discipline of Film Studies at a time when the very existence of film is being called into question by new technological, industrial, and aesthetic developments.