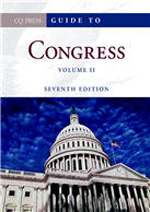 This comprehensive reference offers a complete institutional history of Congress. The 35 chapters of Guide to Congress, Seventh Edition, are divided into eight subject areas that cover all aspects of the U.S. Congress: Origins and Development of Congress, from the constitutional beginnings of the legislative branch to the histories of the House and Senate and their power shifts, eras of partisanship and unity, influential leaders, and working relationships with presidents. Coverage includes analysis of the tug-of-war between House Democrats and the George W. Bush administration on Iraq war withdrawal timetables, updates on criminal investigations of House members, including William J. Jefferson of Louisiana and Charles Rangel of New York, and analysis of the Tea Party Movement and new Republican majority. Powers of Congress, including powers to tax, spend, and borrow; to conduct foreign policy and investigations; to confirm and impeach; to regulate commerce; to amend the Constitution; and to select the president. Updated material includes analysis of the George W. Bush administration’s use of immunity from questioning by congressional committees, analysis of the signing of the new START treaty with Russia—marking a cornerstone of U.S. relations with the country, coverage of the War on Terror—including the killing of bin Laden in a U.S. raid in Pakistan, and perspective on the negotiations to raise the federal debt ceiling in 2011. Congressional Procedures, detailing the party and leadership structures; rules and the legislative process; the committee system, assignment, and procedures; and congressional staff. Revised coverage profiles the methods, styles, and legislative successes and defeats of House Speakers Pelosi and Boehner and Senate majority leader Reid. The Guide also analyzes the new hpyerpartisanship emerging in Congress and provides updates on congressional travel reforms and aide statistics and trends. Pressures on Congress, including influence from constituents, political parties, the president, the Supreme Court, lobbyists, and the media. New material explores the use of social media to communicate with constituents, examines the role of the new Consumer Financial Protection Bureau, and analyzes the Obama administration’s relationship with Congress. Housing and Support, covering the U.S. Capitol, House and Senate office buildings, the Library of Congress, and organizations such as the Government Accountability Office and the Congressional Research Service. Updates are provided on new initiatives by the Library of Congress and reforms to the General Accounting Office. Pay and Perquisites, including honoraria and allowances, franking and travel privileges, and other benefits. Updates include revised figures for congressional pay and benefits and analysis of efforts to control privately sponsored foreign travel. Congress and the Electorate, covering the right to vote, the demographic composition of congress, the role of parties in elections, campaign financing, and redistricting. New information discusses elections statistics in recent elections, the impact of third parties, Tea Party gains, and the creation of “super PACs” and 527 groups. Qualifications and Conduct, detailing congressional ethics investigations and procedures for disciplining members. Updated coverage reviews ethics investigations, including the creation of the Office of Congressional Ethics. Specific investigations and outcomes are discussed, including the censure of Charles Rangel and disapproval of Joe Wilson’s outburst during a speech by President Obama. The text concludes with a selected bibliography and key reference materials: a list of all members of congress who have served since 1789; congressional election results; floor leaders and committee chairs; dates for sessions of congress; women, black, Asian, and Hispanic members; and many more.