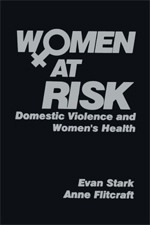 “Women at Risk brilliantly recasts the debate about violence against women and makes a major contribution to feminist thinking about women's health. Practitioners and theorists who want to understand women's health issues from a stunning new perspective must read this book.” --Heidi Hartmann, Ph.D., President, Institute for Women's Policy Research, Washington, DC “Women at Risk is a unique and important blend of research, practice, and advocacy. This volume makes a significant contribution to the health care profession's understanding of violence against women. This is a long-awaited book by two major scholars and practitioners in the field of violence against women.” --Richard J. Gelles, Ph.D., Director, Family Violence Research Program, University of Rhode Island “Women at Risk is a thought-provoking investigation of the violence that may bring women to emergency departments with injuries or suicide attempts. It challenges assumptions that patriarchy causes violence against women and that women are passive victims. And it dares to acknowledge violence by women. It goes beyond a plea for awareness of violence and outlines steps that hospital staff can follow to identify, care for, and advocate for battered women. Evan Stark and Anne Flitcraft strongly affirm the status of wife assault as a public health issue.” --N. Zoe Hilton, Ph.D., Mental Health Center of Penetanguishene, Ontario Filled with groundbreaking research, Women at Risk challenges current explanations of domestic violence and argues that reframing health in terms of coercion and violence is key to the prevention of some of women's most vexing problems. Presenting major findings of studies conducted over 15 years, authors Evan Stark and Anne Flitcraft maintain that the medical, psychiatric, and behavioral problems exhibited by battered women stem from a so-called “dual trauma,” in which the coercive strategies used by their partners converge with discriminatory institutional practices. This timely volume explores the theoretical perspectives as well as health consequences of woman abuse and considers clinical interventions to reduce the incidence of homicide, child abuse, substance abuse, and female suicide attempts associated with battering. In addition, the authors progressively promote the notion of “shelter” not as a facility or service, but as a political space to be opened within families, communities, and the economy--a space where toleration for male coercion ends. Medical professionals, mental health practitioners, social workers, and researchers, as well as advanced students in health, psychology, or the social sciences, will find this compelling volume a thorough resource.