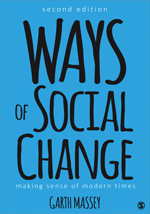 NEW TO THIS EDITION: • New topics include the winding down of the Arab uprising, the Supreme Court’s weakening of restrictions on money in politics, and the assortment of new digital technologies. • Increased coverage of global and comparative perspectives; the concept of globalization; social change in less affluent nations; the impact of digital technology; and growing income and wealth inequality. • Additional perspectives from cultural history and political science add to the book’s sociological framework. • Feature boxes, “Topics for Discussion” and “For Future Study” have been have been revised, expanded and updated. KEY FEATURES: • Devotes a chapter to each of the five major drivers of social change: science and technology, social movements, war and revolution, large corporations, and the state. • Shows students how to effectively research social change and gives significant attention to how social science approaches a question and goes about finding answers. • Uses the biography of a fictional character—Iris Summers, a girl who comes of age in post-World War II America—to illustrate the way sweeping changes on a macro scale can effect an individual life. • Immerses readers in stories of great public events, such as a massive dam project on the Colorado River; the transformation of China from communism to authoritarian capitalism; the chipping away of racial injustice through the courts; the adoption of public health care; and the movement to achieve equal rights for women. • The book draws on a wide range of sources to tell the story of social change: academic studies and journal articles, documentary films, literature, newspaper journalism, public polling data, and scientific reports and are portals for further inquiry and exploration. • An instructors’ test bank is available to adopters for readings, quizzes, and in-class exams.