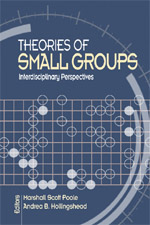 “Theories of Small Groups: Interdisciplinary Perspectives is a book that will make a significant difference in how those interested in the study of small groups think and pursue inquiry about them. In this impressive collection of original essays, the reader is introduced to nine different perspectives that have guided the development of theories and research concerning the nature of group processes. Drawing on the efforts of numerous scholars with backgrounds in biological and social sciences, editors Scott Poole and Andrea Hollingshead provide a useful vehicle for the emergence of enriched understandings of the behavior of groups, enhancing the integration of such knowledge, and the prospects for substantial increases in genuinely interdisciplinary scholarship.”

People live in groups, work in groups, and play in groups. As a result, groups have been a focus of study across the social and behavioral sciences. Although it has been actively pursued within individual disciplines and sub-disciplines, group research as a whole remains fragmented and discipline-bounded.

Theories of Small Groups: Interdisciplinary Perspectives brings together the threads that unify the field of group research. The book is designed to define and describe theoretical perspectives on groups and to highlight select research findings within those perspectives. In this text, editors Marshall Scott Poole and Andrea B. Hollingshead capitalize on the theoretical advances made over the last fifty years by integrating models and theories of small groups into a set of nine general theoretical perspectives. Theories of Small Groups is the first book to assess, synthesize, integrate, and evaluate the body of theory and research on small groups across disciplinary boundaries.

Offers an interdisciplinary approach to group research with contributions from authors across many fields; Includes nine theoretical perspectives, each written by an author team composed of experts who have conducted independent research within that perspective; Organizes chapters in a similar format to easily compare the basic premises and findings examined across the various perspectives covered; Concludes with a chapter that compares and contrasts the nine perspectives in the form of seven “touchstones”- boundaries/embeddedness; competition, conflict and interdependence; causality; regulation of interaction; risk/uncertainty; cognition/intentionality, and time

Theories of Small Groups summarizes the current state of group theory and research in a brief volume that can be used by researchers and in graduate courses that will train the next generation of group scholars. It is an excellent supplementary textbook for graduate courses on small groups in many disciplines, including Communication, Psychology, Management, Sociology, Political Science, and Education.