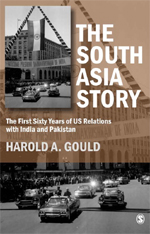 The South Asia Story: The First Sixty Years of US Relations with India and Pakistan

This book carries a series of brief sketches on how twelve US presidents since Franklin Roosevelt perceived and dealt with South Asia—most particularly, of course, India and Pakistan, from World War II to present day. It proposes that US foreign policy was influenced by broad political-historical patterns as well as the personal whims and preferences of the elected president at any given point in time. In this way, though political considerations which underlie their individual actions and define their contexts, foreign policy was also influenced by their unique personalities, levels of awareness, and intellectual gifts (or lack of them).

Events such as World War II, Cold War and most recently, the rise of Islamic radicalism and terrorism posed the most sustained challenges which the presidents have had to encounter and negotiate with caution as far as their political interaction with India and Pakistan was concerned. Interestingly, none of these American presidents ever had any meaningful experience with South Asia prior to entering office. For all of them it was a matter of ‘on-the-job training’ and the way in which they coped with this obviously varied in accordance with their individual political gifts and their ideological predisposition.

Today, with new President Barack Obama, this book provides a lucid and much-needed background to US foreign policy. It is a succinct, informative, and entertaining read. Additionally, good use of a number of news photographs taken at historic moments in US-South Asia relations enliven the text and stimulate visual awareness of the historical events discussed.