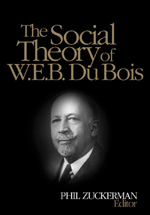 Karl Marx, Max Weber, and Emile Durkheim are widely recognized as the trinity of sociological theory. While these three sociologists were trailblazing social theorists who enhanced the study of human behavior and its relationship to social institutions, other, more contemporary scholars were just as innovative — one of those scholars being W. E. B. Du Bois.

W. E. B. Du Bois was a political and literary giant of the 20th century, publishing over twenty books and thousand of essays and articles throughout his life. In The Social Theory of W. E. B. Du Bois, editor Phil Zuckerman assembles Du Bois's work from a wide variety of sources, including articles Du Bois published in newspapers, speeches he delivered, selections from well-known classics such as The Souls of Black Folk and Darkwater, and lesser-known, hard-to-find material written by this revolutionary social theorist.

W. E. B Du Bois is arguably one of the most imaginative, perceptive, and prolific founders of the sociological discipline. In addition to leading the Pan-African movement and being an activist for civil rights for African Americans, Du Bois was a pioneer of urban sociology, an innovator of rural sociology, a leader in criminology, the first American sociologist of religion, and most notably the first great social theorist of race. The Social Theory of W. E. B. Du Bois is the first book to examine Du Bois's writings from a sociological perspective and emphasize his theoretical contributions. This volume covers topics such as the meaning of race, race relations, international relations, economics, labor, politics, religion, crime, gender, and education.

The Social Theory of W. E. B. Du Bois offers an excellent introduction to the sociological theory of one of the 20th century's intellectual beacons. It is a dynamic text for undergraduate and graduate students studying sociological theory, African American studies, and race and ethnicity.