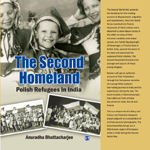 The Second World War presents the backdrop for this riveting account of displacement, migration and resettlement. Once the Soviet forces marched into Poland, thousands of Polish citizens were deported to slave-labor camps in the USSR. As news of their inhuman condition and ordeal spread, Jam Saheb Digvijaysinghji of Nawanagar, a Princely State in British India, opened the doors of his state and welcomed the orphaned Polish children. The Second Homeland chronicles the passage and sojourn of these young refugees.

Readers will get an authentic account of their tribulations through the first-person account of a young Polish orphans hair-raising journey to India and his experiences during the stay. The book includes a historical perspective culled out from archival documents in India, the UK and Poland.

This is a unique mix of a diary, oral history and historical viewpoint placed adjacent to a compilation of archival personal photographs. The book beautifully brings out a little-known aspect of European exiles in India during the Second World War.