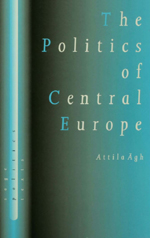 The Politics of Central Europe

The Politics of Central Europe provides a thorough introduction to East Central Europe and its renewed emergence since the momentous changes in the former Soviet bloc. By carefully differentiating between Central Europe, East Central Europe, and the Balkans, Attila -gh shows how the term Eastern Europe was a political misnomer of the Cold War. Drawing on theories of democratization to develop a common conceptual and theoretical framework, this book is the first to place the political and social changes of this complex region in a genuinely comparative perspective. Clearly organized into broad thematic sections, the student is shown how to distinguish between processes of democratization and redemocratization, transition, and transformation and is introduced to the important issues of Europeanization, nation-building, institutionalization, parties, and political culture. Illustrated throughout with chronological charts and the latest data analysis, The Politics of Central Europe provides an invaluable guide to the emerging political systems and the future prospects for systemic change at the core of the new Europe. It will be essential reading to all students of democratization, comparative politics, and European politics.