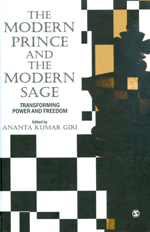 The Modern Prince and the Modern Sage: Transforming Power and Freedom

Ananta Kumar Giri has been furrowing in the frontier regions of contemporary sociological theory. He and a most admirable group of social theorists and philosophers from several countries find that even their frontier worlds are pervaded by mutual challenges between power-craving princes and freedom-seeking sages…. Giri has assembled here 29 cutting-edge essays and much-needed wise reflections on vitally important topics such as development ethics and poverty, the power of non-violent movements, and the moral dimension in world history. - Thomas Pantham, Former Professor of Political Science, M.S. University of Baroda Ever since the Renaissance in the thirteenth century, the 'prince' has been the dominant archetype of 'being' and 'becoming'. Power and politics have provided the modern world with determinant frames of self-constitution and social emancipation, along with a singular definition of 'freedom'. In this context, The Modern Prince and the Modern Sage: Transforming Power and Freedom is concerned with rethinking and transforming the concepts of 'power' and 'freedom' in discourse, society and history. This work draws from various sources-traditional, philosophical, religious and spiritual-in discussing 'power' and 'freedom', and also in bringing together voices of struggle from different parts of the world. It is a highly recommended reading for scholars of humanities and social sciences and can be used as a textbook of social and political theory in departments of sociology and politics. It will also be an invaluable supplementary reading resource for students and researchers of development studies, philosophy and religious studies.