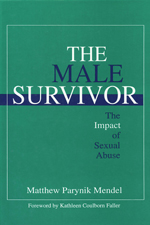 The Male Survivor: The Impact of Sexual Abuse

“The breadth of the book's approach to the subject is impressive in its extensive list of reference will commend it to students, while its brief case vignettes and carefully argued points make it a valuable theoretical book for the counselling practitioner.” --Diane Hammersley in Counselling Matthew Mendel is the first to conduct a national survey among male survivors of sexual abuse. The results of his findings present a sobering study of just how extensive this kind of abuse is in terms of types of sexual activity and number and gender of perpetrators. The Male Survivor examines the phenomenon and long-term impact of sexual abuse on male children, and dispells many myths regarding the invulnerability of male victims. In this pioneering effort, Mendel argues that various societal myths and beliefs have led to a profound underrecognition of male sexual abuse, and that increased attention to, and acknowledgment of, male victimization is needed to reduce the isolation of male survivors, as well as aid in the decrease of abuse incidents. Modifications and revisions of conceptual frameworks regarding long-term sequelae of childhood sexual abuse are also proposed as they apply to the male experience. Clinical practitioners, interns, advanced students and researchers will find the cutting edge research of The Male Survivor to be a valuable contribution in the efforts to understand and treat this population so wounded by early sexual abuse. “The Male Survivor is an important book. Not only does it provide a comprehensive and in-depth literature review (the best I've seen in this area), it also carefully explicates the specific social and psychological issues faced by men who were abused as children. Dr. Mendel has written a scholarly yet clinically useful volume, balancing research with case histories and psychological theory with social analysis.” --John N. Briere, University of Southern California School of Medicine