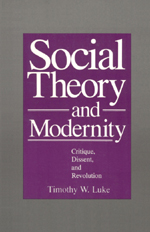 Social Theory and Modernity combines the analytical techniques of political theory and comparative politics as a method for conducting innovative inquiry and research in political science. The focus of political theory, for example, results in new issues for historical and cross-national comparative analysis–whereas comparative analysis provides new parameters for analyzing the ideology of social institutions. In presenting this method, Luke elaborates upon Rousseau's discursive style and critical methods, Marx's historical materialism, Gramsci's theoretical tactics, Marcuse's instrumental rationality, Cabral's theories of critique and revolution, Weber's interpretive method, and Foucault's system of political and social analysis. It concludes by offering an incisive analysis of the moral and ideological influence of behavior and the link between ideology and political economy, especially in modern society. Social Theory and Modernity is essential reading for professionals and students in the fields of political theory, history, comparative politics, sociology, anthropology, social philosophy, and cultural studies. “Luke's book is a tour de force. He writes critical theory in the best sense, applying the ideas of the Frankfurt School, Gramsci, and postmodernism to real social and political issues today. Social Theory and Modernity avoids arid exegesis in favor of engaged and lucid analysis of the global problematics of late capitalism. Not content simply to rehearse the masters of critical theory, Luke refreshes and extends their ideas by developing his own important theoretical voice. Luke is witty and pulls no punches. This accessible book will appeal to readers in a wide range of social-science disciplines, notably including political science and sociology. This book reinforces Luke's reputation as one of the two or three leading critical theorists working today.” – Ben Agger, SUNY, University at Buffalo “This collection of essays provides a rich reading for it collates a lot of innovative ideas in the present day Marxist theory.” – Financial Express