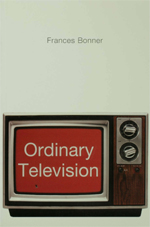 `Most cultural analysis focuses on the spectacular and the unusual. Frances Bonner has done us a great service by insisting on - and demonstrating - the importance of everyday TV. Ordinary Television breaks genuinely new ground' - Toby Miller, New York University In this book, Frances Bonner provides a distinctive angle on a key area of research and teaching across media and cultural studies - the content of television and the relations between television genres and audiences. Hitherto most books on television have focused on drama, or news and current affairs. In other words, they tend to ignore 'ordinary' television - lifestyle programmes and 'reality TV', just the sort of programmes which increasing dominate the schedules. In Ordinary Television, Frances Bonner makes a distinctive argument for regarding these disparate shows as a whole. By examining a substantial range of these programmes, Frances Bonner uncovers their shared characteristics, especially through a consideration of the dominant and disguised discources which pervade them. In addition, the comparative nature of her study enables the author to launch a powerful critique of conventional theories in relation to the globalization of television. This book will be invaluable reading for anyone interested in television and the media in general.