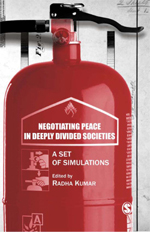 Negotiating Peace in Deeply Divided Societies: A Set of Simulations

Negotiating Peace in Deeply Divided Societies, delineates a novel application of simulations-as training exercises in peacemaking. It puts readers in the shoes of key actors in conflict and conflict resolution processes in order to give a more nuanced understanding of the risks and opportunities, as well as the costs, of making peace.

The book has six simulation exercises based largely on actual or potential negotiations in ongoing peace processes. While the overarching theme of these simulations is to learn from peacemaking in societies that have been violently divided by ethnic or religious conflict, only two of them replicate actual negotiations as they have taken place. Two others envisage an imaginary stage in ongoing negotiations while the others are abstract simulations that address crucial issues of contemporary debate, ending violence and humanitarian intervention.

This combination permits participants to focus on the different stages of conflict resolution in deeply divided societies, the critical issues that are involved, and the changing role that key actors play in making a breakthrough. The six simulation exercises cover important aspects of successful conflict resolution - the early stage of paving the way for a political settlement through achieving a ceasefire; the crucial middle stages of trust-building and addressing root causes; the later stages of negotiations and compromises to reach a final agreement; the post agreement stage of reconstruction and reconciliation; and the role of third parties in pushing through an end to conflict.