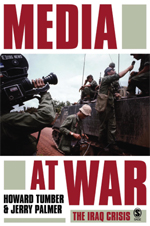 Media at War: The Iraq Crisis

'Tumber and Palmer have provided an invaluable review of how journalists covered and reported the Iraq war and its aftermath. Their exhaustive research has resulted in an impressive analysis that makes this book essential reading' - John Owen, Executive Producer of News Xchange and Visiting Professor of Journalism, City University 'This is a meticulously researched book that lays bare the way the war was reported. Decide for yourself whether the media 'embeds' - of whom I was one - were the world's eyes and ears inside the military, or merely the puppets of the Pentagon and the Ministry of Defence in London' - Ben Brown, BBC 'Media at War offers insights into the ways in which media at war inevitably become participants in both the military and the political wars' - Professor Michael Gurevitch, University of Maryland International media coverage of the war in Iraq provoked public scrutiny as well debate amongst journalists themselves. Media at War offers a critical overview of the coverage in the context of other preceding wars, including the first Gulf War, and opens up the debate on the key questions that emerged during the crisis. For example, - What did we actually gain from 'live, on the spot' reporting? - Were journalists adequately trained and protected? - How compromised were the so-called 'embedded' journalists? Tumber and Palmer's analysis covers both the pre-war and post war phase, as well as public reaction to these events, and as such provides an invaluable framework for understanding how the media and news organisations operated during the Iraq Crisis.