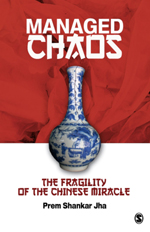 Managed Chaos: The Fragility of the Chinese Miracle

Managed Chaos reads into the resounding events of Chinese politics and economy, ending the schizophrenia that the readers have lived with. It delves deep into both elements: the economic narrative that China has sustained a near 10 percent growth rate for 30 years and the political narrative that China is an increasingly fragile state, trapped in an incomplete transition from a totalitarian to a democratic market economy. For the first time, in his reading of China, the author consolidates this paradox by inferring that the cause behind both the growth and the political discontent is the politics of China.