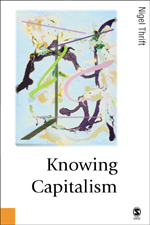 `This is an ambitious, original, and complex treatment of key aspects of contemporary capitalism. It makes a major contribution because it profoundly destabilizes the scholarship on globalization, the so-called new economy, information technology, distinct contemporary business cultures and practices' - Saskia Sassen, author of Globalization and its Discontents `Nigel Thrift offers us the sort of cultural analysis of global capitalism that has long been needed - one that emphasizes the innovative energy of global capitalism. The book avoids stale denouncements and offers instead a view of capitalism as a form of practice' - Karin Knorr Cetina, Professor of Sociology, University of Konstanz, GermanyCapitalism is well known for producing a form of existence where `everything solid melts into air'. But what happens when capitalism develops theories about itself? Are we moving into a condition in which capitalism can be said to possess a brain?These questions are pursued in this sparkling and thought-provoking book. Thrift looks at what he calls "the cultural circuit of capitalism," the mechanism for generating new theories of capitalism. The book traces the rise of this circuit back to the 1960s when a series of institutions locked together to interrogate capitalism, to the present day, when these institutions are moving out to the Pacific basin and beyond. What have these theories produced? How have they been implicated in the speculative bubbles that characterized the late twentieth century? What part have they played in developing our understanding of human relations?Building on an inter-disciplinary approach which embraces the core social sciences, Thrift outlines an exciting new theory for understanding capitalism. His book is of interest to readers in Geography, Social Theory, Antrhopology and Cultural Economics.