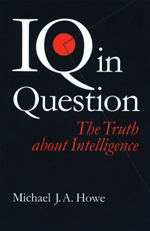 IQ in Question: The Truth about Intelligence

`In this remarkably economical, clear and informed book, Mike Howe... sets about unravelling the formidable semantic, logical and empirical knots into which IQ testers and their supporters have tied themselves.... Howe suggests that we have, for decades, been asking the wrong kinds of questions. He points to the number of alternative, theoretically richer, views of human intelligence that don't reduce all to a single dimension... this is rendered with an easy, readable style which assumes no previous technical knowledge' - British Journal of Educational Psychology In this provocative and accessible book, Michael Howe exposes serious flaws in our most widely accepted beliefs about intelligence. He shows that cr