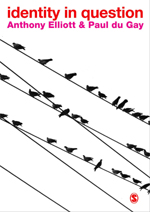 Whilst undoubtedly one of the most controversial but also most established issues in research and debate within the contemporary social and human sciences, as well as in cultural studies, work on 'identity' has undergone dramatic changes in recent years. The aim of this book is to provide a detailed analysis of those changes, by confronting the impact of both substantive challenges, concerning globalization, individualization and commodification, for instance, and theoretical developments, from within post-structuralism, psychoanalysis and post-feminism, for example, upon conceptions and formations identity in the current age. The main aim of this volume is to outline and interrogate the ways in which contemporary theoretical and substantive developments in our understanding of identity have played out across the major traditions of cultural and social theory prominent today. The result is a decisive intervention into debates concerning identity, subjectivity, and personhood.The highly distinguished group of contributors comprises Zygmunt Bauman, Drucilla Cornell, Anthony Elliott, Stephen Frosh, Paul du Gay, Charles Lemert, Angela McRobbie, Jeffrey Prager, Janet Sayers, Lynne Segal and Richard Sennett.Identity in Question provides an invaluable survey of cultural and social theories of identity and will be of interest to students and professionals in cultural and media studies, sociology, social theory, political science and philosophy.