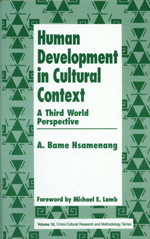 In his forcefully argued and eloquent book, Bame Nsamenang takes issue with the assumptions and fallacies that undergird [unrepresentative] research and scholarship. He demonstrates the crucial role played by the physical and cultural context in delimiting the nature of the opportunities made available to children and the goals of their parents, and in conditioning the directions in which children and parents develop…. The result is a richly argued and well-documented treatise in which scholarly and polemical arguments come together in synthesizing a broad, novel perspective on human development…. All readers will enjoy the engaging and lucid style which Dr. Nsamenang has brought to his topic. This is a book that will be read widely for information, enjoyment and edification. From the Foreword Michael E. Lamb, Institute of Child Health and Human Development Much has been observed and discovered about child development since developmental psychology emerged as a viable science a century ago. Yet until today, most of this knowledge has been gleaned from biased studies which focus on the exceptional, affluent offspring of highly-educated, largely white parents. Now, for the first time, a social scientist from a nonwestern country has provided a comprehensive, systematic account of human development which is sensitive to the needs, interests, and ecologies of nonwestern cultures and individuals. In Human Development in Cultural Context, Rame Nsamenang argues that cultural, physical, social and economic opportunities both shape and constrain an individual's development; he asserts that the sociocultural context from which families, communities, and organizations operate have far-reaching implications which must be accounted for when assessing development. Throughout, the author seeks to emphasize the importance and value of a multicultural and multicontextual perspective in constructing a theory of human development. The newest volume in Sage's Cross Cultural Research and Methodology series, Human Development in Cultural Contextwill be of great value to students of psychology and developmental scientists of all cultural backgrounds.