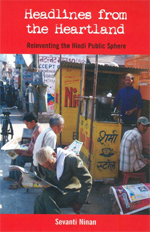 Headlines from the Heartland: Reinventing the Hindi Public Sphere

Headlines From the Heartland: Reinventing the Hindi Public Sphere is the first in-depth study of the ongoing newspaper revolution in the Hindi-speaking states of India. With improved literacy levels, communications and purchasing power, the circulation of Hindi newspapers has grown rapidly in small towns and rural areas. By focusing their content to serve a local readership, some multi-edition Hindi newspapers have risen to the top of the national readership charts. Against the backdrop of the relationship between press and society, author Sevanti Ninan describes the emergence of a local public sphere; reinvention of the public sphere by the new non-elite readership; the effect on politics, administration, and social activism; the consequences of making newspapers reader rather than editor-led; the democratization of the Hindi press with the advent of village-level citizen journalists; and the impact of caste and communalism on the Hindi press.

Based on over 150 interviews with journalists, readers, publishers, politicians, administrators, and activists, as well as expert content analysis, this book tells the ongoing story of the press in the Hindi heartland.