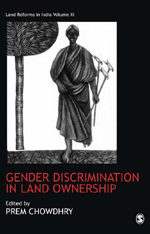 Contemporary India demonstrates a curious labyrinth of land ownership patterns and rights for women co-existing in various states and the inter-regional and intra-regional differences between communities and caste groups. Initiated by the Centre for Rural Studies of the Lal Bahadur Shastri National Academy of Administration, Mussoorie, this volume is a collection of essays on Land Reforms in India by social scientists across disciplines from fourteen different states. The editors offer an in-depth analysis of the laws governing access and control of land and its ownership by women in the various states of India. They examine the diverse ways in which discrimination is experienced by them in their respective states and propose ways to counter this rampant gender inequality.

With the help of data the book shows the differences in land ownership patterns and land rights for women across regions, communities and castes. It understands how and why the state laws in relation to agricultural labor, tenants and other farmers, land ceilings, allocation of surplus lands, distribution of ownership titles and other land reforms have failed to accommodate women.

Gender Discrimination in Land Ownership examines the dominant role played by cultural and customary practices in depriving women of legal rights which they may have had, and proposes ways, based upon extensive field work as well as interaction between legal experts, social activists and bureaucrats, to counter gender inequality in all the major zones of India. This interdisciplinary study with its wide contemporary reach will encourage debates on existing society and the augmentation/implementation of laws and rights required to establish a more just and equitable society.