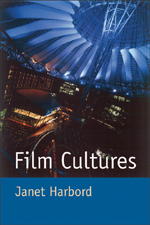 'Film Cultures is thought-provoking and challenging. By opening film theory up to the many simultaneous networks of relation (that is, the cultures) of film, it asks both viewer and student to take film more seriously' - Communication Research Trends `Film Cultures weaves together insights from cultural theory and film studies to provide a complex and absorbing theoretical account of contemporary film culture. Harbord writes with authority, imagination and wit and her delicate deployment of modernist and postmodernist cultural accounts makes rewarding reading' - Christine Geraghty, Professor of Film and Television, University of Glasgow Film Cultures argues that our tastes for film connect us to social, spatial and temporal networks of exchange and meaning. Whether we view film in the multiplex, arthouse or the gallery, as cinema premiere, video hire or from a cable channel, whether we approach film as a singular object or a hypertext linked to ancillary products, our relationship to film is inhabiting a culture. Shifting the focus of film analysis from the text to paths of circulation, Film Cultures questions how film connects us to social status, and national and global affiliations.