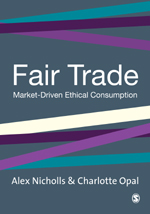 'Today, Fair Trade finds itself at a crucial point in its evolution from alternative trading mechanism to a mainstream economic model. As the only certifier in the largest Fair Trade market in the world, TransFair USA has observed the explosive growth in consumer awareness and business interest in Fair Trade certification. New research into the progress of Fair Trade to date and, crucially, its key future directions is urgently needed. Fair Trade is therefore a valuable and timely contribution.The range and depth of the book is considerable. It is international in outlook and engages with a broad spectrum of theory and thinking. Its style is approachable yet rigorous. I would strongly recommend it to industry, academics, students, policy-makers and the interested reader in general' - Paul Rice, CEO, TransFair USA'This work - a powerful study of the maelstrom of issues and cross currents in the Fair Trade and Development movements is long overdue. Through case studies, quantative analysis and reasoned arguement, this work makes its case with cogent force'- Hamish Renton, Product Manager Food You Can Trust, Tesco'With the fair trade sector growing rapidly, it is vital that the concept is understood properly and the future potential mapped out. Fair Trade provides a comprehensive guide to all aspects of fair trade which make it a "must read" for everyone from casual buyer right through to seasoned producer. Here's your chance to see how you can easily change the world for the better'- Mel Young, editor-in-chief, New Consumer, Britain's only fair trade magazine, www.newconsumer.org.Fair Trade is at a crucial moment in its evolution from alternative trading mechanism to mainstream economic model. This timely and thoughtful book looks at the strategic future for Fair Trade. Each chapter spearheads a key area of Fair Trade thinking and theory and the political, legal and economic context of Fair Trade is given careful scrutiny. Difficult questions are tackled such as `What is the role and value of corporate social responsibility?' and `What is the brand meaning of Fair Trade?'Throughout, readers are supported by:- Revealing case studies and useful data analysis; - Concise histories of different Fair Trade organisations;- Chapter summaries and conclusions.