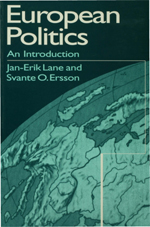 This comprehensive textbook is the first to go beyond a western European perspective and provide a clear overview of European politics. Authors Jan-Erik Lane and Svante O. Ersson address the similarities of key political features among states in western, central, eastern, northern, and southern Europe and look forward to political developments toward the turn of the century. European Politics provides a thorough analysis of several converging key themes, including the nature of the state, party systems, and the formation of government and public policies. With this approach to economic, social, and political aspects of politics in Europe this major text presents a Europe that—within the context of reform—transition, and integration, has more in common in the early 1990s than ever before. With a clear thematic structure and helpful discussions of data drawn from 31 countries, European Politics offers both an accessible and genuinely comparative text that will be essential reading for students and researchers alike.