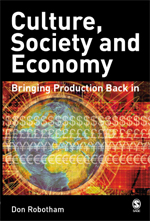 Culture, Society and Economy: Bringing Production Back in

‘Robotham offers here a clear-headed exposé of the limits of classical liberalism in the face of world production today. His theme is both urgent and iconoclastic. There is an unusual clarity about the exposition and a drive that comes from passionate engagement combined with long experience, reading and reflection’ — Keith Hart, Goldsmiths College, London. In Culture, Society and Economy, Don Robotham examines the failure of recent social theory to grasp the problems of globalization and the emergence of corporate monopoly capital, and sets out his own argument for a radical solution. He argues that the neglect of economics by both cultural studies and social theory has weakened the ability to develop viable alternatives to present day capitalist globalization. With deep awareness of, and reference to, current events and contemporary trends, the author presents a detailed critique of: ȁ cultural studies, in particular Stuart Hall and Paul Gilroy; Giddens' theory of ‘risk society’; Scott Lash and John Urry's ‘economies of signs and space’; Manuel Castells' theory of ‘network society’. The final chapters make a unique argument that the solution to the problems of globalization lies in more globalization rather than adopting an anti-globalization or ‘localization’ position. Don Robotham proposes more effective centralized institutions for governing the world economy, in other words — world government.