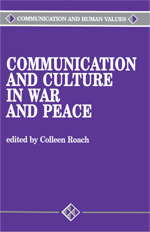 Communication and Culture in War and Peace

“Roach provides an excellent account of the contributions of feminist peace researchers to the analysis of cultural militarism and its twin, cultural violence against women. Altogether, this book is a worthy enterprise that will help both activists and scholars gain a more in-depth understanding of the barriers to change errected by the media's use of information technology, and will be useful in developing scenarios and strategies for the creative use of that technology for peaceful social transformation.” --Elise Boulding in Media Development Does the media have a perverse fascination with war and violence? Do television, newspapers, and magazines neglect the forces of peace in favor of the more dramatic war machines, thereby amplifying the guns rather than muting them? If so, how does media coverage reflect the culture for which it works? By exploring the role of both culture and mass media, this volume fills a crucial void in the study of war and peace. Outstanding scholars provide a history and overview of critical mass media research and investigate emerging issues dealing with the ongoing debate over communication in war and peace. Several chapters deal specifically with the role of communication culture in the Gulf War, while others discuss more general themes, including the military/industrial/communication complex, cultural imperialism, and transnational control of communication. Many of the essays offer a uniquely feminist reading of war and peace, a perspective typically unacknowledged in mainstream communication work. This timely book also weaves peripheral concerns like multiculturalism, international communication law, women and peace, and communication technology into the primary themes of media and war. The research and practical information given here will be useful for courses in peace and conflict studies, international mass communication, and intercultural communication. Professionals in international relations, negotiations, and the media will find this book to be both fascinating and illuminating. “Original research on the coverage of disarmament stories and peace issues in Canadian dailies and Vincent Mosco's excellent blueprint for converting the military machine to a peace system give Roach's work practical and positive dimensions. Abstracts at the beginning of the chapters, full bibliographies, and a preface by the ‘father’ of peace studies, Johan Galtung, add to the importance of this book. Recommended for anyone interested in the use/minuses of mass media to cover up/explain/promote governmental efforts to keep situations tense and warlike.” --Choice “Communication and Culture in War and Peace provides a strategic road map for scholarly and citizen action. This is tightly edited, passionately--and convincingly--argued, and a broadly conceived book. It fills a large gap and is likely to be a widely used seminal resource and text for some time to come.” --George Gerbner, Professor of Communication and Dean Emeritus, University of Pennsylvania