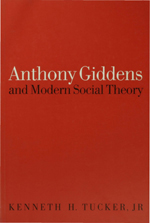 Giddens is widely recognized as one of the most important sociologists of the post-war period. But there has been a surprising failure in the academic literature to place his work in the context of other theoretical positions and research traditions. Consequently, there has been a vagueness about what is unique or different about Giddens's social theory. This is the first full-length work to examine Giddens's social theory. It guides the reader through Giddens's early attempt to overcome the duality of structure and agency. Giddens himself saw this duality as a major failing of social theories of modernity. His attempt to resolve the problem can be regarded as the key to the development of his brandmark “structuration theory.” The book investigates the ways in which Giddens's approach to agency and institutions draws on theorists such as Wittgenstein and Goffman, who failed to develop a “macro” approach to sociology. Giddens's far-reaching work has also touched on issues such as the transformation of modern intimacy and sexuality and the fate of politics in late modern society. The text systematically relates Giddens's theoretical concepts to modern social theory. It compare and contrasts his work with major currents in social theory, including the work of Habermas, Foucault, Bourdieu, Elias, and Parsons and with schools of thought such as feminism, ethnomethodology, Marxism, symbolic interactionism and postmodernism. This book is the most complete and thorough assessment of Giddens's work that is currently available. It incorporates insights from many different perspectives into his theory of structuration, his work on the formation of cultural identities, and the fate of the nation-state. This book will be required reading for anyone who wants to gain a reliable, critically aware introduction to Giddens's social theory. It will be particularly interesting to students of sociology and cultural studies.