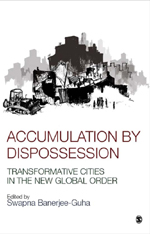 Accumulation by Dispossession: Transformative Cities in the New Global Order

Globalization and a neo-liberal world order are impacting the global urban system, resulting in massive transformation of cities across the world. This transformation, which is currently the center of focus among sociologists, will continue as more and more city spaces are occupied in the wake of globalization.

This book is a collection of essays written by some of the most famous theoreticians and academics in the area of urban studies on this transformation process of cities and its socio-economic ramifications.

These essays analyze the signs of intense spatial crisis in metropolises, revealing the contradictory processes of integration and segmentation that characterize the critical nature of global city space. Crisis of urban space in such cities, the book argues, is essentially related to their placement in the world city system and the limitations in their globalocal networks. Restructuring spaces also leads to differentiated and contradictory processes, the book reveals, since not all segments of the population are affected equally. The process benefits only parts of society and, therefore, only parts of the city space. This book shows how Centre and Periphery, reflect the differentiation between global society and segmented localities, how these stand spatially anchored, creating a background of intense urban conflicts.

This volume explores and exposes a divided framework in which globalization operates towards fragmentation and polarization; debunking the myth of homogenization. The essays reveal that cities and regions across the world get incorporated into this system, exhibiting characteristics that are more diverse and complex than ever before especially due to the increasingly contradictory relationship with their local resource and cultural base.