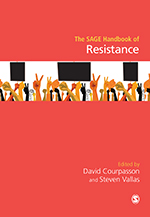 The SAGE Handbook of Resistance

Occupy. Indignados. The Tea Party. The Arab Spring. Anonymous. These and other terms have become part of an emerging lexicon in recent years, signalling an important development that has gripped many parts of the world: millions of people are increasingly involved, whether directly or indirectly, in movements of resistance and protestation. However, resistance and its conceptual “companions”, protest, contestation, opposition, disobedience and mobilization, all seem to be still mostly seen in public and private discourses as illegitimate and problematic forms of action. The time is, therefore, ripe to delve into the concerns, themes and legitimacy. The SAGE Handbook of Resistance offers theoretical essays enabling readers to forge their own perspectives of what “is” resistance and emphasizes the empirical and experiential dimension of resistance - making strong choices in terms of how contemporary topics related to resistance help to rethink our societies as “protest societies”. The coverage is divided into six key sub-sections: Foundations Sites of Resistance Technologies of Resistance Languages of Resistance Geographies of Resistance Consequences of Resistance