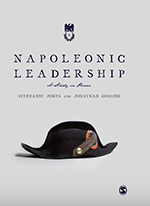 Napoleonic Leadership: A Study in Power

‘Whether you are studying leadership, or doing leadership, this is a rollicking good read, and a fabulously rich book.’ - Ken Parry, Professor of Leadership Studies and co-Director of the Deakin Leadership Centre, Australia

He came to France an immigrant and left an exile – but, in a career spanning just 35 years, he became general, consul and emperor.

How did Napoleon's name come to be synonymous with brilliance, legend and glory despite displaying opportunistic and manipulative tendencies, and repeatedly deserting those that followed him? 200 years after his defeat, what lessons can we learn from his successes and his failures?

As the world marks the 200th anniversary of the Battle of Waterloo, this fascinating study on leadership and power tackles the questions that continue to intrigue and mystify. As now, power was gained and held by political manipulation, patronage, fear, putsch, charisma, popular vote and the new idea of meritocracy.

Through the inclusion of Reflections and Questions, Jones and Gosling also highlight some important lessons for current and future managers and leaders.

Visit the authors' website http://www.napoleonic-leadership.com for a Diagnostic Exercise, Power questions and Chronology of Leadership.